With great satisfaction, we present the first issue of the eigth year of the ALCONPAT journal.

The V8 N1 issue begins with a research from Brazil, in which Emerson Felix et al analyze and numerically model the corrosion process, estimating the service life of concrete structures. The modelling process was divided in two stages, initiation and propagation. The modeling of the initiation phase was carried out by Artificial Neural Networks (ANN), and the modeling of the propagation phase was done by means of Finite Element Method (FEM). The results show the efficiency of the model generated by the coupling of ANN to the FEM to analyze and study the durability of reinforced concrete structures under uniform corrosion, as well as the numerical model applicability to estimate the service life of reinforced concrete structures.

The second paper comes from Mexico, where Tezozomoc López et al discuss about the electrochemical behavior of reinforced concrete elements without and with addition of sodium chloride (NaCl) in the mixing water. They were exposed in a marine/tropical environment and the monitoring consisted of measuring corrosion potential (Ecorr), carbonation front advance (xCO2) and photographic record of the concrete/steel interface at different stages of the exposure time. The addition of NaCl in the mixing water favored the advancement of carbonation in the outdoor exposure, without showing the beginning of corrosion. The presence of chloride was decisive in the beginning and development of the process of corrosion for both, exposure to the outdoor and immersion.

In the third paper from Brazil, Romildo Alves et al present an experimental program to investigating the potential of the use of sugarcane bagasse ash as a partial replacement of cement in the production of mortars. Sugarcane bagasse ashes from two origins were studied - one from sugarcane industry and other from pizzerias that use this material in replacement of the wood in their ovens. The methodology followed the characterization of the material, where it was carried out through laboratory tests using X-ray diffraction (XRD) and X-ray fluorescence (WDXRF) and initial tests for the ideal quantification of cement substitution by residues. Results obtained indicated that both residues exhibited pozzolanic features presenting about 60% of amorphous material in their composition. Compressive strength tests at different ages showed satisfactory results. The paper concludes that residues played an important role in increasing short and long term compressive strengths.

The fourth paper, by Othavio Toniasso Takeda and Wellington Mazer, from Brazil, discusses the potential of thermographic analysis in the evaluation of pathological manifestations in building façades. Its use can aid in identification and diagnosis, reducing the time and costs of these activities. To implement this technique, the calibration of the thermal sensor was performed, and the tests were performed in two different periods of sunlight. The results showed that the application of thermographic analysis allows the identification and measurement of the extent of hidden pathological manifestations in façade cladding systems, including difficult access sites, complementing the results of visual inspections and reducing their subjectivity.

The fifth work of this number is written by Eudes de Arimatéa Rocha ed al from Brazil. They present the elaboration and implementation of a damage map in a 16th century building with the aim of promoting the preservation of this historical-cultural heritage. The study adopts the elaboration of the damage map from the damage identification sheets developed during the inspections, configuring itself as an important tool to register problems and guide the prophylaxis services. The complexity of the analysis of historical buildings is emphasized, since it is essential to know the techniques and materials used in these constructions. It is concluded that the use of the indicated stages, in the elaboration of the map of damages, provides subsidies that facilitate the analysis of the symptomatology and the correct diagnosis, guaranteeing a more reliable treatment.

In the sixth work, from Brazil, Alexandre Machado and Luiz Carlos Mendes investigate the load behavior on the tie rods of anchored curtain walls built to eliminate geological-geotechnical hazards on hillsides in the city of Rio de Janeiro. Taking into account increases in overload due to the growth in construction uphill of these structures and the end of their service lives, a simulation was conducted using the Plaxis computational system to estimate the loads on the tie rods of 20 anchored curtains after 50 years. Those results were compared with results obtained from residual load verification tests. The comparison shows that although the theoretical simulations indicate increases in loads over 50 years due to the additional overloads, the tie rods tend to lose load, even with increased overloads in the anchored curtains.

In the seventh work, from Brazil, Clayton José Gomes Silva et al discuss the structural and functional conditions of 332 bridges and viaducts of the Federal Highways of Pernambuco, adopting as methodology the database of the National Department of Infrastructure of Transportation (DNIT) and structural inspections that constitute the sample studied. The information obtained was analyzed according to criteria of the standard DNIT 010/2004 – PRO and standard ABNT NBR 9452/2016. It is the first survey in Brazil with such quantity of structures using two normative systems. Although with the limitations of this type of study, the conclusions show that it means a contribution to improvement of the Brazilian’s highways bridges that, in general, suffer from the same problems that exist in the analyzed bridges.

The article that closes the edition is from Erick Maldonado et al from Mexico. They present and discuss the results of a corrosion inspection, as well as a repair proposal for the external walls of a reinforced concrete tower which is in the southern coast of the Veracruz state. The inspection included a drone guided damage survey together with physical, chemical, mechanical and electrochemical tests that allowed the concrete characterization and corrosion damage. The governing deterioration mechanism of the structure was carbonation of concrete. However, the sulfate emission in this industrial environment was reflected on the compressive strength, cracks and delaminations. These conditions were taken into account on the proposed actions for repairing and extending the service life of the structure.

This first issue of the year opens with good news because we are launching a new version of the OJS platform where you can now consult statistics and other parameters that you did not have before. The portal is now fully translated into English and Portuguese and has English as the default language. As a result, our citation index increased considerably during 2017 in Google Scholar. Likewise, Revista ALCONPAT is already indexed in the SciELO Citation Index, a Web of Science integral database, which places us in the forefront of evaluation for our future incorporation to the WoS Journal Citation Reports (JCR).

We are confident that the articles in this issue will be an important reference for those readers involved with issues of modeling applications and service life, as well as inspections with modern and / or improved methodologies. We thank the authors participating in this issue for their willingness and effort to present quality articles and meet the established times. 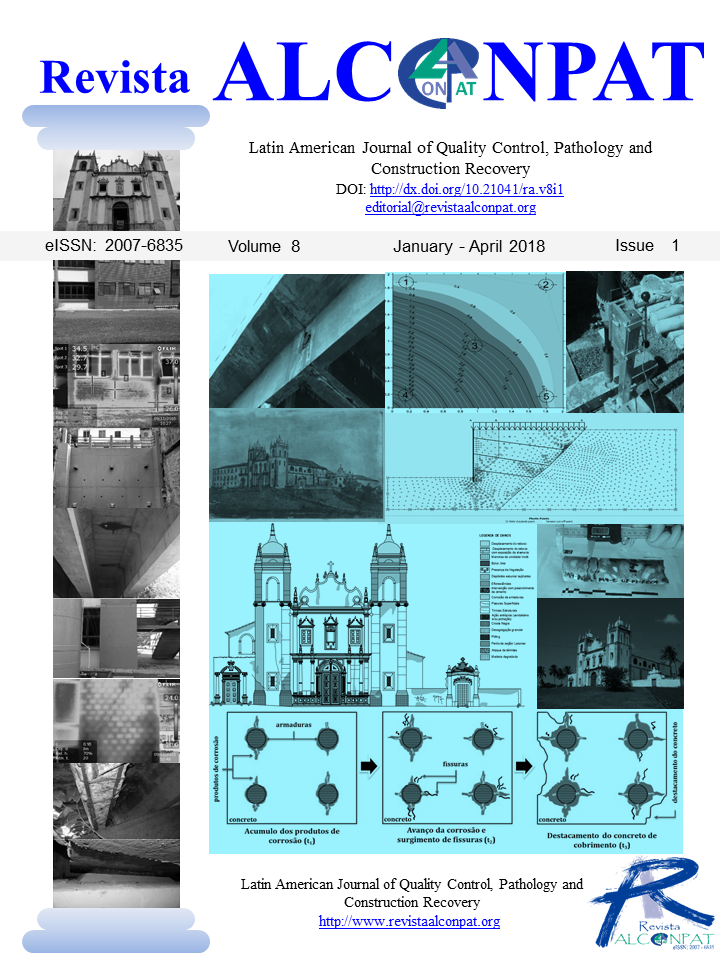