With great satisfaction, we present the third issue of the tenth year of the ALCONPAT Journal.

The objective of the Journal is to publish contributions of basic and applied research directly associated with the solution of problems related with quality control, pathology and recovery of constructions being welcomed studio cases in these areas.

This V11N3 edition begins with a work from Brazil, where Friancieli Tiecher and colleagues evaluate different types of cement against the incidence of Late Ettringite Formation (DEF), using mortars produced in the laboratory and exposed to a high curing temperature. during a study period of 12 months. DEF represents one of the types of internal sulfate attack (ISA) related to an expansive chemical reaction that occurs in concrete that involves cement sulfates. The experiments included the evaluation of tensile, compressive and expansion strengths, and microstructural characteristics over time. It was observed that the mortar tests required a prolonged evaluation period to distinguish the behaviors between the cements. In addition, the initial high-strength cement had the worst performance in relation to DEF.

In the second work, from Spain, Flora Hebe Gurdián Currán and colleagues evaluate the mechanical and durability properties of concretes with low environmental impact with substitutions of cement by industrial by-products (35% fly ash and 15% catalytic cracking catalyst) and aggregates. coarse from recycled aggregates (20% and 100%). The concretes studied have been subjected to tests for mechanical characterization, porosity, air permeability and chloride ion penetration level. The results obtained show that the mechanical properties are reduced with the increase in the proportions of recycled aggregate and of the residues used as substitution in the cementitious matrix, while the durability properties are only affected by the increase in the percentage of aggregates. recycled. All the concretes studied are suitable to be used as structural concrete.

The third work in this issue is from Mexico, where César Antonio Juárez Alvarado and colleagues propose partially replacing stirrups with steel fibers to improve the shear strength of beams. As variables they used the water / cement ratio (a / c), 0.55 and 0.35, the fiber volume (Vf), 0, 0.3, 0.5, 0.7% and 0, 0.2, 0.4, 0.6% respectively, and the stirrup separation. The results showed that the shear resistance with stirrups and fibers was greater than the resistance of the reinforced beams with only stirrups. The comparison between the experimental data and analytical models for the prediction of resistance, showed that the effect of the relationship (a / c), (Vf), and the contribution of longitudinal and transverse steel is adequately predicted. In addition, the studied models predicted mostly conservative values for the ultimate experimental shear strength.

In the fourth article from Venezuela, Oladis Troconis de Rincón and colleagues evaluate the effect of waste clay from a polyol production process, as a partial substitute for cement in reinforced concrete, in concentrations of 0%, 5% and 10%. The physical-mechanical characteristics of the concrete and the electrochemical characteristics of the steel were determined during a period of 356 days (ISO 11474), in 15x10x5 cm specimens, with two steel bars embedded in the concrete. The results indicate that the compressive strength decreased proportionally according to the clay content, increasing for the 90 days of curing. However, the capillary sorption of the concrete decreased, which allowed the steel in a marine environment to maintain its passive state for longer than its targets, for the evaluated a / c ratios (0.45 and 0.60).

The fifth article, by Analiet Calvo Valdés and colleagues, comes from Brazil and aims to evaluate the effectiveness of a multi-electrode galvanic sensor in detecting the probability of corrosion in reinforced concrete prisms subjected to wet and dry cycles in a solution. NaCl. Corrosion potential readings (Ecorr) obtained using a copper sulfate copper electrode (Cu / CuSO4), galvanic current (Igal) and galvanic potential (Epar) readings were analyzed. The developed sensor showed sensitivity to detect the chloride front and predict the possibility of armor corrosion. The variables Ecorr, Epar and Igal presented different behaviors as parameters to monitor corrosion.

The sixth work of this issue is written by Renan Dias and colleagues from Brazil. This work aimed to identify, map and quantify the pathological manifestations (BD) in mortar façade coatings (EMR) of 22 residential buildings in Fernandópolis-SP, Brazil. To quantify the BDs, the incidence (M-INC) and intensity (M-INT) methods were used, considering five typified regions of the façade: continuous walls (1-OCW), around gaps (2-OOP), upper part of parapets and eaves (3-TOP), under balconies / balconies / cantilevers (4-BCP) and corners / edges (5-OCE). 4351 and 481 BDs were observed by M-INT and M-INC, respectively, performing standard degradation maps. The most frequent BD were stains and cracks. The regions most affected by M-INT were 2-OOP (34.5%), 1-OCW (23.3%) and 4-BCP (21.60%), and for M-INC they were 1- OCW (39, 9%), 3 -TOP (29.3%) and 2-OOP (16.6%).

The article that closes the edition is by Taís Lara Pio Santos and Paulo Francinete Silva Júnior from Brazil, they present the methodology for the inspection and mapping of the pathological manifestations in the monument of the Pórtico del Bautismo Cultural de Goiânia. It is a monument from the early 40s of the 20th century, representative of the art deco architectural style. In 2003 this monument was listed by the National Institute of Historical and Artistic Heritage, but despite its invaluable historical value, the structure has several pathological manifestations. To achieve this objective, the following procedures were performed: (1) visual inspection; (2) photographic record; (3) anamnesis and (4) trials. The tests carried out were sclerometry, pacometry and deformation measurement. The main pathological manifestations identified were cracking, mortar detachment, reinforcement corrosion and excessive deformation.

This issue includes for the first time a Technical Editorial, prepared by members of the expanded JDI, which illustrates the lessons to take into account when structural failures occur. In this case, the collapse of Miami, was the issue addressed.

We are confident that the articles in this issue will constitute an important reference for those readers involved with questions of evaluations and characterizations of materials, elements and structures. We thank the authors participating in this issue for their willingness and effort to present quality articles and meet the established deadlines. 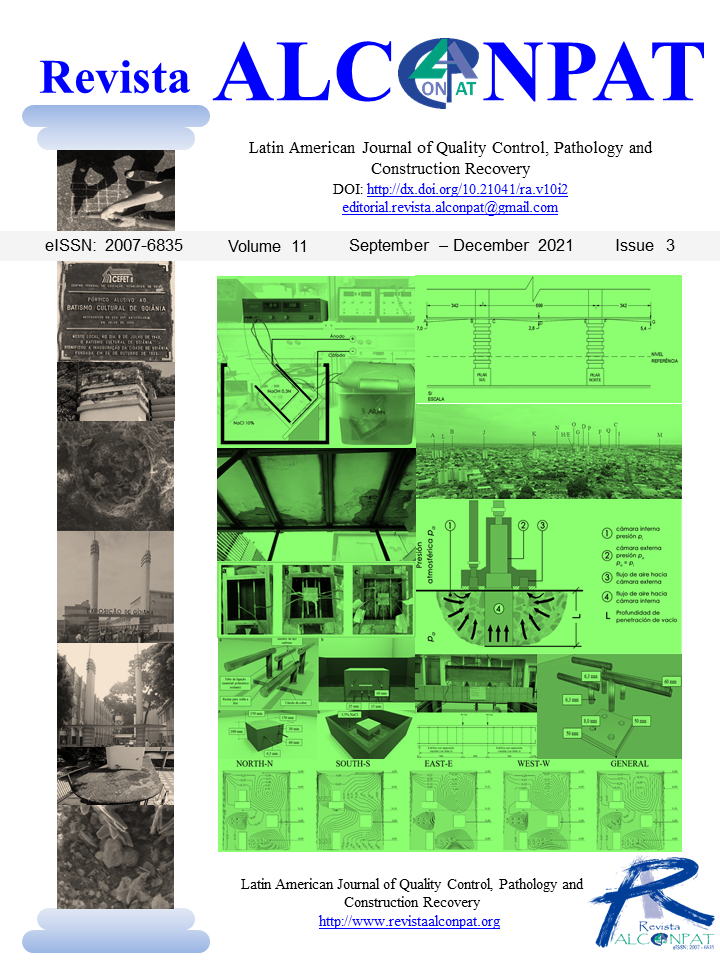