With great satisfaction, we present the second issue of the tenth year of the ALCONPAT Journal.

This edition presents our eighth Special Issue, this time dedicated to advances in science and technology of concrete for celebrating the extensive academic trajectories of Dr. Ravindra Gettu and Dr. Venkatesh Kodur, who were honored during the 3rd R N Raikar Memorial International Conference, held in Mumbai, India in December 2018.

This V10N2 issue begins with a work from India, where Ravindra Gettu and colleagues present a review about a decade of research carried out at IIT Madras on cementitious systems. It has shown that the partial replacement of portland cement with supplementary cementitious materials (SCMs) has significant benefits, as well as limitations. The SCMs do not adversely affect the long-term compressive strength and drying shrinkage of concretes, though there may be some compromise in workability and the resistance against plastic shrinkage cracking. Through the assessment of the chloride ingress rate in concrete and chloride threshold of steel, it is evident that the use of SCMs could significantly enhance the service life under chloride attack, though there is a reduction of the carbonation resistance. More importantly, SCMs can lead to significant reduction of the carbon footprint of concrete, and hence, are essential to achieve sustainability.

In the second work, from Spain, Carmen Andrade presents a review about the limitations of the models of corrosion initiation with indications to overcome them. Performance-based design of durability is at present a trend considered in fib Model Code (MC2010). However, we are still far from accurately predicting the performance of a structure in a specific environment, in spite of which performance-based requirements are introduced in the concrete specifications of large infrastructures demanding 100 years or more of service life. The depassivation step and the propagation period with considerations on their probabilistic treatment are also commented. It is proposed to consider corrosion onset as a “deterioration or initiation Limit State” (DLS or ILS). An example of calculation the time to cover-cracking induced corrosion is included.

The third work of this issue is from Turkey, where B. Y. Pekmezci and E. Y. Tuncel present an experimental study that was planned and executed for the application of Phase Change Materials (PCM) containing fiber-reinforced cementitious panels on buildings. The objective of their research was to enhance the thermal performance of the panels. PCM containing composites showed higher latent heat capacity and lower thermal conductivity. Reinforcement with chopped fibers compensated the strength loss due to PCM in cementitious panels. Specific fracture energy of the panels increased with increase of PCM ratio. PCM containing fiber reinforced cementitious panels showed great potential for energy efficient buildings with enhanced thermal and mechanical properties.

In the fourth article, from Canada, M. Aqel and D. K. Panesar decouple the physical and chemical effects of limestone filler (LF), when used as a cement replacement. The effects were decoupled using LF and a chemically inert material (brucite Mg(OH)2). Paste, and mortar specimens were steam cured for 16 hours at 55°C. The heat of hydration, thermal analysis, x-ray diffraction, and compressive strength, were evaluated at 16 hours and at 28 days. LF can adversely affect the properties through dilution effect. However, heterogeneous nucleation compensates for the dilution effect at 16 hours while the production of mono-carboaluminate compensates for the dilution effect at 16 hours and 28 days. The study could be broadened by considering a wider temperature range. The originality lies in the method of decoupling the physical and chemical effects. Measurable effects of the physical and chemical contribution of LF are evident on the mechanical and transport material properties.

The fifth work, by Alejandro Durán-Herrera and colleagues, from Mexico discuss the synergetic effect of a super-absorbent polymer in combination with a calcium nitrite corrosion inhibitor that were evaluated as a combined technology to improve concrete durability in High Performance Concrete. The effect of these technologies was evaluated by measuring the following parameters: autogenous and drying shrinkage, surface electrical resistivity and the non-steady-state chloride migration coefficient. The results indicated that the synergistic effect of SAP + CNI improves autogenous shrinkage and surface electrical resistivity.

The sixth work in this issue is written by A. H. Akca and N. Özyurt from Turkey. The relation between crack growth and reduction in the compressive strength after high temperature exposure and after air re-curing was investigated in this study. Concrete specimens were heated to 1000ºC and they were subjected to air re-curing for 28 days. During re-curing period, their heated surfaces were monitored by using a digital single-lens reflex camera and the images were analyzed by using image analysis software. After cooling, the maximum reduction in the compressive strength of concrete was 49.5% and that of air re-cured concrete was 66.8%. Image analyses showed high correlations between crack growth and reduction in the compressive strength. This non-destructive method has the potential to represent the extent of damage in concrete after high temperature exposure.

In the seventh work, from USA, V. K. R. Kodur and A. Agrawal present an approach to evaluate residual capacity of fire-damaged concrete structures. The advanced analysis approach involves capturing response in three stages; namely, structural response at ambient conditions (prior to fire exposure), thermo-mechanical response during fire exposure, and post-fire residual response after cooling down of the structural member. The proposed approach is implemented in a comprehensive numerical model developed in the finite element computer program ABAQUS for specifically evaluating residual capacity of an RC beam after exposure to different fire scenarios. Predictions from the numerical model are utilized to highlight importance of each stage of analysis in evaluating realistic residual capacity of fire damaged concrete members.

In the eighth work, from Mexico, Pedro Castro and colleagues discuss the passivation process quality considering polarization periodicity, passivation consolidation parameters, and data treatment. Passivation process quality in steel reinforcement affects a structure’s planned future service life. Some research has addressed this phenomenon, but its study is complicated by the limits of analogue-era data, dispersion in corrosion rate data, and their interpretation. Two series of small reinforced concrete beams were built using two water/cement ratio and two curing/storage combinations and exposed to marine environment. Polarization periodicity had no effect on passivation/depassivation during passivation but on the data treatment. The curing and storage process influenced the tendency towards depassivation. Post-curing storage type affected cumulative corrosion rate from 1 to 5 µA*day/cm2; this is equivalent to the margin of uncertainty in interpretation.

The article that closes this edition is written by S. S. Bhonge and colleagues from India who describe the need for a rehabilitation methodology for the evaluation of distress and a proposal of likely remedial measures for a 100 year old Steel Bridge on the Ulhas River at km 1/ 800 on Bhiwandi road, Kalyan, near Mumbai. The bridge was constructed in 1914 during the British era, making it a heritage bridge, by British engineers with a unique structural arrangement of jack arch decking and warren truss girder with verticals. A structural audit in 2000 revealed the deterioration of steel parts and concrete initiated long ago because of the humid environment in the area. Durgadee Bridge showed various signs of distress like major cracks in masonry abutments, heavy corrosion of the mild steel structural members, non-functioning of expansion joints and bearings, failure and deterioration of jack arch roof plates, de-bonding of concrete and exposed reinforcement etc. The paper describes the draft policy/ proposed stages of rehabilitation and repair, proposed methodology and procedure for corrosion protection.

We are confident that the articles in this issue will constitute an important reference for those readers involved with questions related with science and technology of concrete. We thank the authors for participating in this issue, and for their willingness and effort to present high quality articles and meet the established timelines.

Commentary on the special issue

In 2018, we were honored together at a Symposium on Advances in Science & Technology of Concrete, organized by the India Chapter of the American Concrete Institute, Mumbai, 2018, as part of the 3rd R N Raikar Memorial International Conference. It was humbling for us to be the company of the previous honorees, Profs. Suru Shah, Nemy Banthia and P.A.M Basheer, as well as to receive the warmth and hospitality of the conference organizers, especially Surendra Manjrekar, and the many friends, well-wishers and researchers, who participated in this event. It is of great pleasure that we are recognized again together in this special issue of the Revista ALCONPAT, and are grateful to the Association, and Pedro Castro Borges, in particular, for the generous gesture.

We fondly recall our visit to Tuxtla, Gutiérrez, Chiapas, México, for CONPAT 2019, and the opportunity to meet many ALCONPAT members, and have fruitful discussions with Latin American researchers and students.

The scientific community working in the science and technology of concrete has always been characterized by camaraderie and friendly discussions. The problems are often the same in many parts of the world, and there is always a lot to learn from the experiences of others. The exchange of ideas also prevents the same mistakes from being repeated. New techniques and technologies developed in some regions can be implemented better in other regions as we become wiser to overcome the limitations and constraints. Standards and codes formulated painstakingly in certain places can be used and improved upon in other countries. Our field of structural concrete does not evolve so rapidly, which has positives and negatives, and consequently information reaches all corners of the world fast enough for implementation.

Journals such as Revista ALCONPAT has the ability to focus on scientific questions that are relevant to practice and the effort taken to bring together high-quality papers in each issue is certainly commendable. We thank all the authors and the editors who have made this issue, one which is very special to us, possible. 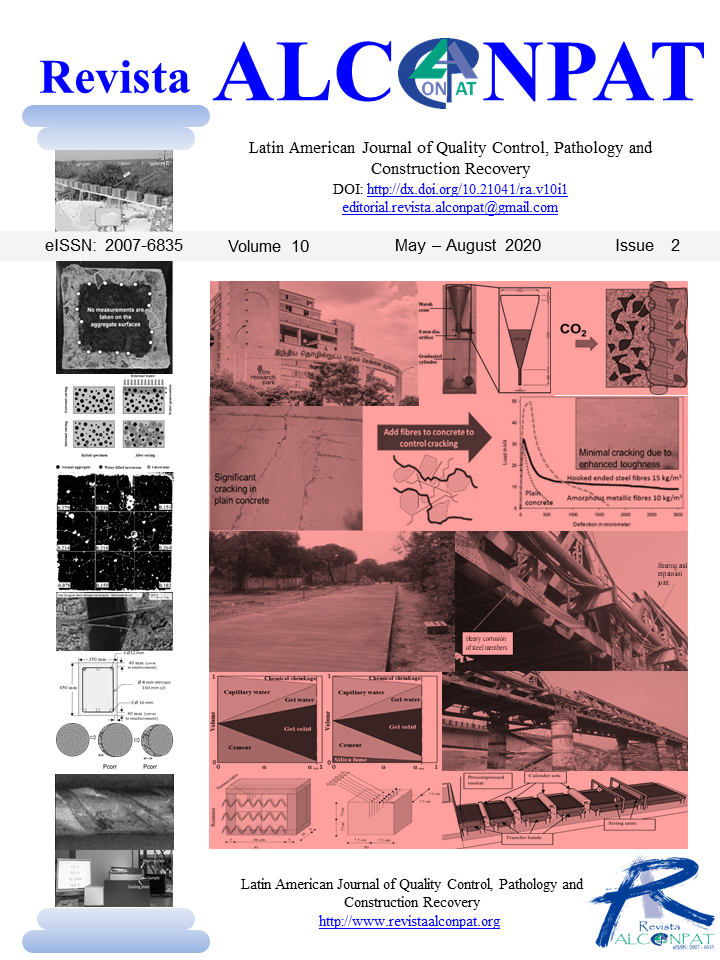