Journal of the Latin-American association of quality control, pathology and recovery of construction

With great satisfaction, we present the second issue of the ninth year of the ALCONPAT journal.

This V9N2 issue begins with a work from Brazil, where Graziela Pereira da Silva and colleagues present a review about the influence of infrared thermography on masonry walls to detect pathological manifestations. A systematic review was carried out through research with automatic search and snow-balling, selection and sifting of articles to restrict them to the desired theme. After that, infrared thermography in the pathological manifestations was studied along with the thermal properties and their behavior, thermal bridges, temperature difference and air infiltrations. Some care must be taken during the execution of experiments and measurements. It has also been shown that infrared thermography is a complex technique.

In the second work, from Mexico, Pedro Jesús Poot Cauich et. al. present a review that addresses the mechanics of adhesion, strengthening effect and durability issues of applications of carbon fiber reinforced polymer (CFRP) composite materials in beams. The application of CFRP materials has been widely described, but the focus has been on overall failure parameters. The first issue is strengthening capability of CFRP reinforcement for concrete beams. The second is the local interface bond stress-slip relationship, that is, the local slip. The last issue is the durability of the CFRP sheet/plate, when exposed to a hydro-thermal environment. The role of adhesion and the mechanics of concrete-CFRP adhesion and a sound understanding of the interface between the CFRP and concrete behavior is the key factor for controlling debonding failures in CFRP-strengthened RC beams.

The third work of this issue is from Brazil, where Ronaldo Medeiros-Junior and colleagues confront the following concrete properties: water absorptions (by immersion and capillarity), electrical resistivity and compressive strength. Results showed that concretes with higher content of pozzolan had higher resistivity and greater absorption by capillarity, for water-cement ratios lower than 0.60. This behavior is attributed to reduced pore diameters and microstructure densification. However, for water/cement ratio of 0.60, concrete with lower content of pozzolan presented higher absorption by capillarity. It was observed that the compressive strength and the electrical resistivity behaved inversely proportional to the water/cement ratio, and the absorption by immersion and capillarity are directly proportional to the water/cement ratio. Correlations with high determination coefficients were found between tests.

In the fourth article, from Mexico, José Trinidad Pérez-Quiroz et. al. discuss the corrosion performance of dissimilar welded joints between ASTM A615 and AISI 304 stainless steel with and without buttering using Inconel 182. In both cases, the filler metal was ER-309L and the base metals were prepared with a 45° single bevel. One half of the specimens were welded with “buttering” using Inconel 182. The electrochemical results showed that despite welding defects, the welded specimens formed a passive layer in alkaline environments. The specimens welded with buttering exhibited the best corrosion resistance and mechanical properties.

The fifth work, by Daniel V. Ribeiro y Rafaela Oliveira Rey, from Brazil evaluated the aggregate alkali reactivity (AAR) of the aggregates used in the metropolitan region of Salvador and the use of mineral additions in order to mitigate this reaction. The accelerated test method using mortar bars, recommended by NBR 15577-4: 2008, was used. The results indicate that the sands of the metropolitan area of Salvador have low reactivity, however, the gravels presented high reactivity and that mineral additions with pozzolanic characteristics can mitigate the AAR. This study, although limited to the conditions used, is unprecedented in the State of Bahia and presents a high index of originality, since it uses higher contents of mineral additions than conventional use. It was concluded that micro silica, if used at very high contents, can even accelerate the AAR.

The sixth work in this issue is written by M. Rendón Belmonte and colleagues from Mexico. They describe properties related to the durability of five different mixtures of concrete with different contents of activated fly ash (AFA) and Portland cement (CPC 40). The measurements carried out were apparent speed of ultrasonic pulse, electrical resistivity, fast ion permeability of chloride and mechanical resistance to compression. The performance of all mixtures proved to be durable, and the development of the electrical resistivity and the decrease in the level of the chloride ion permeability were enhanced by the contents of AFA, although the resistance to compression at higher contents of AFA was minor. The maximum percentage of AFA to comply with the current criteria of durability was 65%.

In the seventh work, from Brazil, Denis Cardoso Parente et. al. evaluate the use of reuse water from sewage treatment plants in the manufacture of simple concrete casting blocks. The use of these blocks has been adopted as a rationalization option in the structural masonry composition and sealing, by allowing reduction in the losses of materials and coating layers. The study includes the analysis of the physical and mechanical properties of the blocks dosed with effluent and the results show that these properties remain unchanged, which can make feasible the use of the effluent.

In the eighth work, from Cuba, Jennifer Lopez Guevara and colleagues report that Santa Clara de Asis Convent High Choir timber truss has been the victim of humidity and the attack of abiotic and biotic agents which have caused its gradual degradation. For the identification of pathological processes associated with these agents and because of its patrimonial character, a diagnosis study based on an organoleptic inspection and superficial tests was carried out with the available instruments, which allowed identifying the causes. By modeling the structure on SAP 2000 program, they obtained the results that were used to calculate the solutions proposed for the identified pathologies, mainly for the loss of connection between the wall plate and the tie rod beam.

The article that closes this edition is written by Henrique Jorge Nery Lima y et. al. from Brazil, who present the case study of pathological manifestations in concrete structures, located in the Northern Road Hub of Brasília, using the GDE / UnB methodology, which qualifies and quantifies the degradation of structural damages. The general state of the structure was characterized in order to serve as a subsidy for decision making regarding routine interventions, in order to extend the useful life of the structure. The methodological routine consists of conducting field inspections; catalog of structural pathologies with photographic survey; characterization of pathologies and classification according to the weighting factors and damage intensity factors of the structure according to the GDE / UnB methodology for special works of art; calculation and overall classification of the structure damage.

We are confident that the articles in this issue will constitute an important reference for those readers involved with questions of evaluations and characterizations of materials, elements and structures. We thank the authors participating in this issue for their willingness and effort to present quality articles and meet the established times. 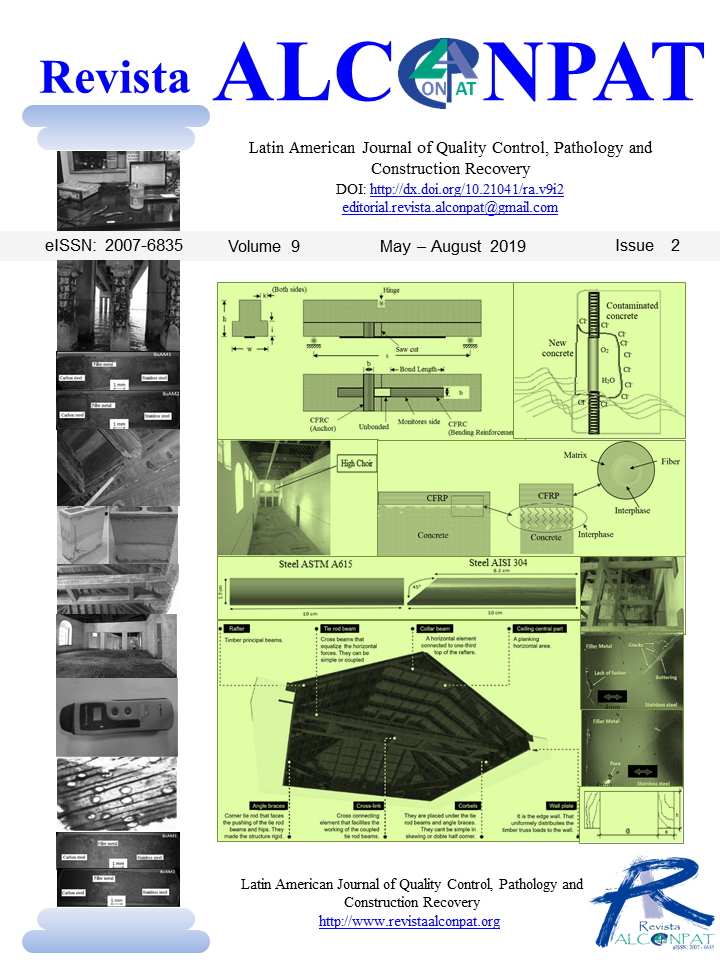