Journal of the Latin-American association of quality control, pathology and recovery of construction

With great satisfaction, we present the first issue of the ninth year of the ALCONPAT journal.

The V9 N1 issue begins with a work where Nicolle Christine Sotsek and colleagues provide, through a systematic review of the literature and focused on the quality control of buildings, a consistent database to present the most used criteria by the Building Performance Evaluation (BPE). It was possible to define 9 dimensions of analysis that are presented and discussed in this document.

In the second work, Cristiano Corrêa et. al. present the computational simulation of a fire previously carried out as an experiment in a room that reproduced a single-family residence room, typically burnt down in the city of Recife (Pernambuco, Brazil). The objective of the article is to compare the results of the development of the temperatures of the gases obtained through computer simulation with the Fire Dynamics Simulator software (FDS) through the measurements obtained in the experiment. It was verified that the results obtained through the model developed in the FDS were coherent with those obtained experimentally.

In the third article, Mauricio de Pina Ferreira et. al. evaluate the influence of anchoring on the flexural strength of beams reinforced with Carbon Fiber Reinforced Polymer (PRFC) blankets. The parameters affecting the performance and strength of the beams are evaluated, and the sizing criteria of FIB Bulletin 14 (2001) and ACI 440-2R (2008) are discussed. It was observed that, even with auxiliary devices in the anchoring of the PRFC, there is the possibility of premature failures, and that both recommendations lead to safe, but overly conservative estimates in cases where the anchoring of the PRFC blanket is carried out properly.

In the fourth article, by Yagho de Souza Simões and Carol Ferreira Rezende Santos, we compare two techniques of structural reinforcement, carbon fiber and metal foil, used for the recovery of reinforced concrete structures degraded by fire. A deterioration of a beam in a fire situation is simulated from a thermal numerical modeling and, next, the reinforcements are calculated. It is concluded that carbon fiber has greater advantages regarding the reinforcement of beams.

The fifth work in this issue is written by Ricardo José Carvalho Silva and colleagues, who analyze the efficiency of reinforcement in reinforced concrete beams by adding steel bars and epoxy adhesive. The tests showed that the clamps reduced the strength of the beams, compared to those that did not. The reinforced beams without clamps obtained better results, but the most important limiting factor was the adhesion between the epoxy and the beam. The use of clamps to try to solve the problem of adherence gave originality to this investigation.

In the sixth work, Marcela Tavares de Araujo Silva and colleagues evaluate an ultrasound test to estimate the depth of cracks in the concrete, using a mathematical model of the literature, in addition to checking the depth with better results. The results show that the test is sensitive to detect the presence of cracks in the concrete. The mathematical model used allowed to estimate the most depths of fissures; but the results are scattered and with a high margin of error for the depths of 5 cm and 15 cm, since for 10 cm better results were observed.

The seventh work in this issue is written by Renato Guilherme Pereira and colleagues, who present an experimental program to determine the residual strength of bi-supported reinforced concrete beams subjected to pure bending after fires. The beams presented, up to 120 minutes of exposure to fire, a good performance after the fire, not showing a significant reduction in their residual strength, and the numerical model was accurate in forecasting the temperatures and the residual rupture load when the experimental results were compared.

The article that closes this edition is by Erick Maldonado et. al. they present the results of concrete manufactured with supersulfated cements (SSC) volcanic material bases. After 180 days, the concrete with a cementitious compound of 5% An-10% CP-10% CaO-75% PM exposed to the CaSO4 solution reached a compressive strength of 46 MPa and 44 MPa in dry conditions. laboratory. The microstructure was analyzed by scanning electron microscopy, energy dispersion spectroscopy and XRD, showed that the main hydration products are C-S-H and ettringite.

We are confident that the articles in this issue will be an important reference for those readers involved with issues of modeling applications and service life, as well as inspections with modern and / or improved methodologies. We thank the authors participating in this issue for their willingness and effort to present quality articles and meet the established times. 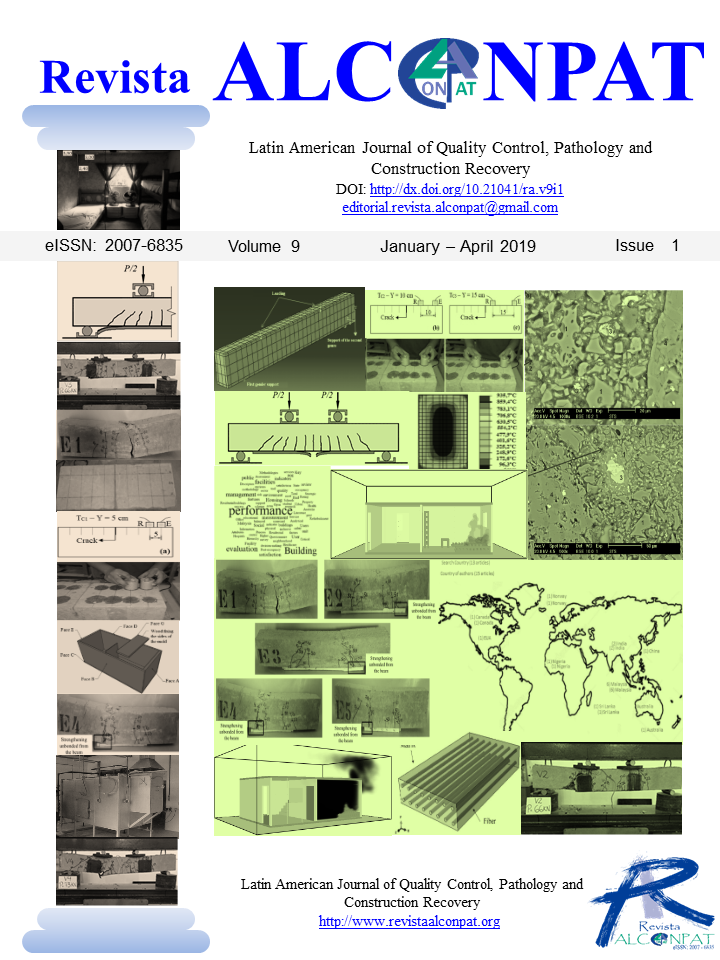