JOURNAL OF THE LATIN AMERICAN ASSOCIATION OF QUALITY CONTROL, PATHOLOGY AND RECOVERY OF CONSTRUCTION

With great satisfaction, we present the third issue of the 8th year of the Revista ALCONPAT (RA).

The aim of the journal is to publish case studies, quotable production (basic and applied research, reviews) and documentary research, related to the themes of our association, namely quality control, pathology and recovery of constructions.

In 2017 a workshop on service life prediction of reinforced concrete in the CONPAT 2017, to honor Carmen Andrade because of its 70th anniversary and fruitful career, was made. As a result, and as part of the celebration, the RA N3 V8 is a special issue on issues related to the service life of concrete structures in her honor. This edition begins precisely with an account of historical events in the area of corrosion and durability, which expanded knowledge since late last century, which Carmen has lived and narrated in detail.

The first work of this issue comes from South Africa, where Mark Alexander presents an international overview of current knowledge and progress in service life design and modelling of concrete structures. It explores why service life modelling is needed, and indicates that modern demands for longevity, durability, and sustainability of concrete structures cannot be fulfilled without service life modelling. It addresses the current approaches to durability design and specification and concludes that a move to performance-based approaches is imperative for progress to be made. Examples from international experience are cited to illustrate progress that has been made. Lastly, the paper discusses ways of moving forward, recognizing that the philosophical bases are already in place in the form of general code formulations, but which need to be converted into useful approaches.

In the second work, coming from United Kingdom-China, M. Basheer and colleagues make a review of techniques, highlighting the challenges and opportunities to evaluate the high performance concrete transport properties. They confirm that the in-situ characterization of the permeability properties of concrete is the most viable means to assess durability and has become increasingly important in the last 20 years. They show and describe a variety of methods that provide a range of parameters, such as air permeability, water absorption, capillary absorption, and the migration coefficient of chlorides.

In the third article from Spain, Carmen Andrade describes the use of concrete electrical resistivity as durability performance parameter and the complementary information that resistivity can provide like: setting period, mechanical strength and degree of curing. Also, it is explained how to design the concrete mix to obtain a target resistivity. Current codes have requirements for the durability design of concrete based on compressive strength and provisions related to cement content and water/cement ratio. For reinforcement corrosion the codes also specify the maximum flexural crack widths. However, modern trends specify the performance rather than the concrete characteristics. This performance approach demands to define a durability controlling parameter, such as the chloride diffusion coefficient, with its corresponding test and model to predict the time to steel corrosion

The fourth article, by Pedro Castro Borges and Paulo Helene, comes from Mexico-Brazil; they analyze and discuss a conceptual approach that considers the holistic character of concrete service life but splits it into seven time-stages that can be compared, for understanding purposes, with those of a human being. The paper discusses the overlapping of the different time-stages as well as the reasons why the prediction models can fail.

The fifth work in this issue is written by Enio Pazini and Carmnen Andrade from Brazil-Spain, they evaluate the influence of five different types of coatings applied on the rebar on apparent diffusion coefficient of oxygen (Dap (O2)) and on the corrosion intensity (Icorr) in comparison with a reference coating composed of a cement-sand mortar. The apparent diffusion coefficient values (Dap (O2)) ranged from 2.1 x 10-6 cm2/s to 4 x 10-9 cm2/s, causing variations in the corrosion intensity measurements (Icorr), due to the cathodic corrosion process control.

In the sixth work, from Argentina, Yuri Villagran and colleagues present an analysis of experimental data from conventional concrete regarding sorptivity and penetrability under pressure comparing these parameters to chloride diffusion rate determined in the laboratory and in actual marine environment. The results show the limitations of both parameters as prescriptive indexes, with capillary absorption rate showing some advantages over water penetration under pressure.

In the seventh work, from Venezuela-Mexico, Oladis Troconis de Rincón and colleagues evaluate the correlation between crack width and apparent corrosion rate in reinforced concrete specimens exposed for more than six years to a tropical marine environment, at the natural test site La Voz, Venezuela. An empirical correlation between surface crack propagation rate and iCORR was established, which may help to indirectly estimate the value of iCORR, if values of maximum surface crack widths due to reinforcement corrosion are obtained in at least one-year period of monitoring.

The eighth article, by Paulo Helene and colleagues, comes from Brazil; they present results of concrete compression resistance control with Brazilian standardization, as well as comparisons with the controls proposed by ACI 318-14 and EN 206. For this article a real case study was carried out, where a concrete dosage was used with fck = 40MPa, self-consolidable, produced during 2 years and 9 months and applied in the structure of a building in the city of São Paulo.

The article that closes the edition is by Miguel Martínez and colleagues from Mexico-United States, who present a live load test and a qualification analysis on a pier damaged by corrosion in the Gulf of Mexico to assess its structural integrity. The results showed that corrosion damage did not represent an extreme structural threat; however, it was discovered that the structural elements of several pillars are currently overloaded and need to be reinforced externally. The procedures for testing, analysis and data handling are described.

This third issue closes with the news that RA has met the quality requirements to continue to be an international level journal on the CONACYT evaluation.

As an interesting fact, this edition increases the number of articles according to the expected trend. Likewise, the international nature of RA with articles from Argentina, Brazil, China, Spain, the United States, Mexico, the United Kingdom, South Africa and Venezuela is again manifested, four of them being international collaborations, which, of course, will increase the impact of RA.

We are confident that the articles in this issue will constitute an important reference for those readers involved with modeling and service life issues. We thank the authors participating in this issue for their willingness and effort to present quality articles and meet the established times. 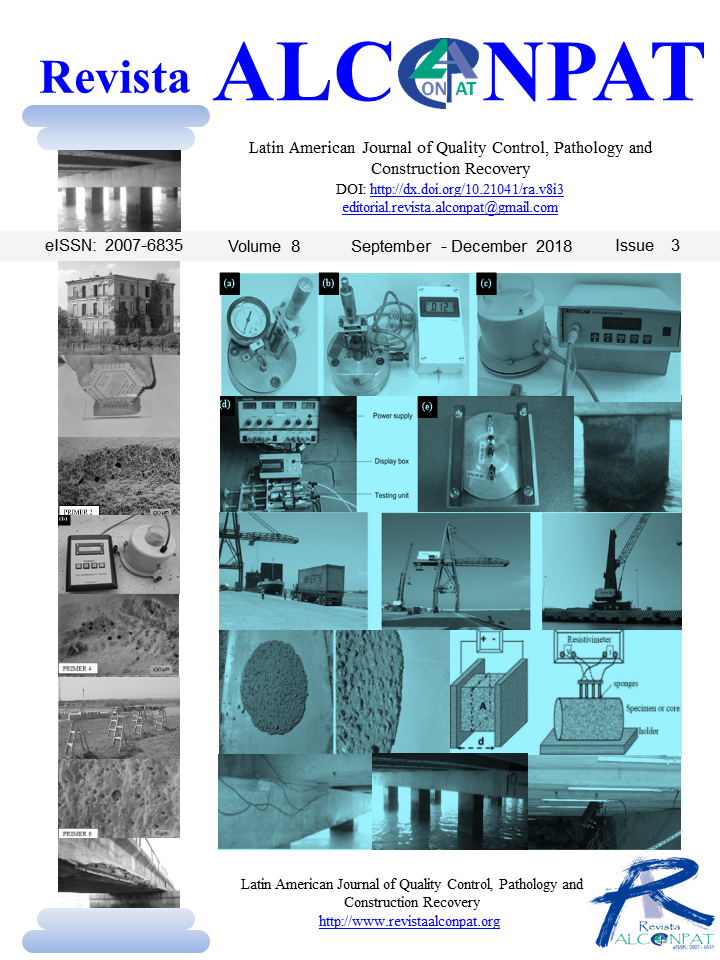