With great satisfaction, we present the second issue of the 8th year of the ALCONPAT journal.

The aim of the journal is to publish case studies, quotable production (basic and applied research, reviews) and documentary research, related to the themes of our association, namely quality control, pathology and recovery of constructions.

The V8 N2 issue begins with a research from Brazil, in which Romildo Berenguer et al purpose to analyze, through chemical tests, the quantity of chloride ions in concretes made from different traces (proportions of materials) in their depths. Laboratory tests were performed, and test samples were made partially immersed in seawater, according to standards and the Mohr method. The results confirmed that the penetration percentage of chloride ions is less for the rich trace, when compared with the other test samples studied. Accordingly, it is concluded that the stronger the concrete, the greater the resistance to chloride ion penetration. These results were expected, since the concrete with greatest strength and made from the same materials tends to hinder the entry of these ions.

The second paper comes from Brazil, where Carina Ferreira et al verify the compatibility of an existing predictive model of life with the penetration of chlorides in exposed concrete elements in the city of Pelotas / RS. To this end, the samples were exposed at different locations in the city for a period of 16 months and silver nitrate solution was applied to determine the depth of the chlorides. The Bob model (1996) was used for comparison and analysis of the results. Significant values of chloride were found in the elements together with a great potential of the model applied when describing the behavior of the depth of chlorides over time, despite the differences found.

In the third paper from Brazil, Rosana Schmalz et al studied the influence of nanosilica dispersed on superplasticizer, and its combined effect with silica fume, on different concrete properties. Compressive strength, tensile strength by diametrical compression and water absorption by capillarity tests, as well as accelerated durability tests against chloride ions were carried out. Results indicated that isolated nanosilica addition (0.1 to 0.5%) did not improve concretes in any tests performed. However, for 0.5 and 0.7% content of nanosilica combined with 10% of silica fume, there was an increase in compressive strength, reduction of capillary absorption and reduction of chlorides penetration.

In the fourth paper, Denio R. C. de Oliveira et al, from Brazil, investigated the behavior of six uniaxial compression columns. Specimen featured an initial section of (120 x 200) mm2, a final section of (200 x 200) mm2 and height of 1.600 mm, strengthened on the tensile and compression sides with plaster or not. Adherence between new and old concrete, and cracking pattern was satisfactory. Although coated columns showed the same behavior to their respective non-coated ones even when concrete area was reduced by approximately 20%, problems consisted in the crushing of the reinforced concrete layer immediately prior to the rupture of the columns. This strengthening proved to be more adequate when undertaken at the columns´ compressed zone and may be executed through conventional procedures with or without mortar coating layer.

The fifth work of this number was written by Wilfrido Martínez et al from México. Their objective was to quantify the colorimetric values of clay with different types of additives. Aesthetic appreciation, based on the color of clay with different addition percentages (by clay mass), is explored using clay from the Santiago Undameo Bank, Mexico. The clay was kaolinite, and the additions were gypsum, lime, opuntia cactus mucilage, Portland cement, and sodium hydroxide. The addition percentages were 2%, 4%, 6%, 8% and 10%. The best colorimetric performances were obtained from Portland cement at 6%, sodium hydroxide at 4%, lime and gypsum at 8% and opuntia cactus mucilage at 4% and 8%. Some buildings where these clay materials were used are Casas grandes in Paquimé, Chihuahua, La Venta in Tabasco, and Yácatas in Tzintzuntzan, among others.

In the sixth work, from Brazil, Romildo Berenguer et al discuss the effect of air entrainment on the mechanical behavior and durability of molded concrete elements. The experiment was carried out using samples with 4 different masses (1500 kg/m3, 1700 kg/m3, 2000 kg/m3, and 2300 kg/m3) and 3 water/cement ratios (0.63-1:5, 0.50-1:4, 0.43-1:3) that were tested to determine compressive strength, water absorption, void index, and carbonation depth. The results showed significant decreases in performance and in the protection indicators of the reinforcement (water absorption and carbonation), confirming the need for additional mitigation for the structure (protective paints, stainless steel bars), under penalty of premature loss of durability over its lifetime.

In the seventh work, from Mexico, José Manuel Mendoza Rangel et al studied the influence of sugar cane bagasse ash (SCBA) as a partial substitution of Compound Portland Cement (PCC) to enhance the properties of a granular sand soil. AASHTO standard compaction test, unconfined compressive strength test, and CBR test were made. It has been compared the behavior of natural soil in study and mix with percentages of 3%, 5% and 7% of PCC as a control percentage, being carried out partial substitutions of PCC by SCBA in 0%, 25%, 50% and 100% percentages with respect to dry soil weight. The results showed enhances in the compacting, CBR and unconfined compressive strength features, reducing up to 25% the consumption of PCC.

The article that closes the edition is from Eduardo L. Machado et al from Brazil. Their study aimed to identify whether the use of a BIM platform software associated with the AHP decision-making method can assist in the decision-making process during the design phase of projects. Three construction systems were analyzed: Load-bearing masonry, Light Steel Framing and Light Wood Framing. BIM modeling enabled scenario simulations and facilitated the extraction of data, which, in turn, assisted experts in the selection of the most appropriate constructive system, considering the established criteria. The originality of this research lies on the consideration of several factors relevant to constructive system choice. The limitation lies in modeling only the walls of the analyzed constructive systems, and not of the complete building.

This second issue opens with the news that RA has met the quality requirements for its incorporation into Scopus and JCR. Therefore, at the beginning of the year, the corresponding application was made. We will be in evaluation for 1 - 4 years, after which I am sure we will be incorporated. Now, it is essential to meet and continue to meet the quality parameters, some of them being punctual in the publication, and in the three complete languages.

We are confident that the articles in this issue will be an important reference for those readers involved with issues of chloride, modeling applications and service life, as well as inspections with modern and / or improved methodologies. We thank the authors participating in this issue for their willingness and effort to present quality articles and meet the established times. 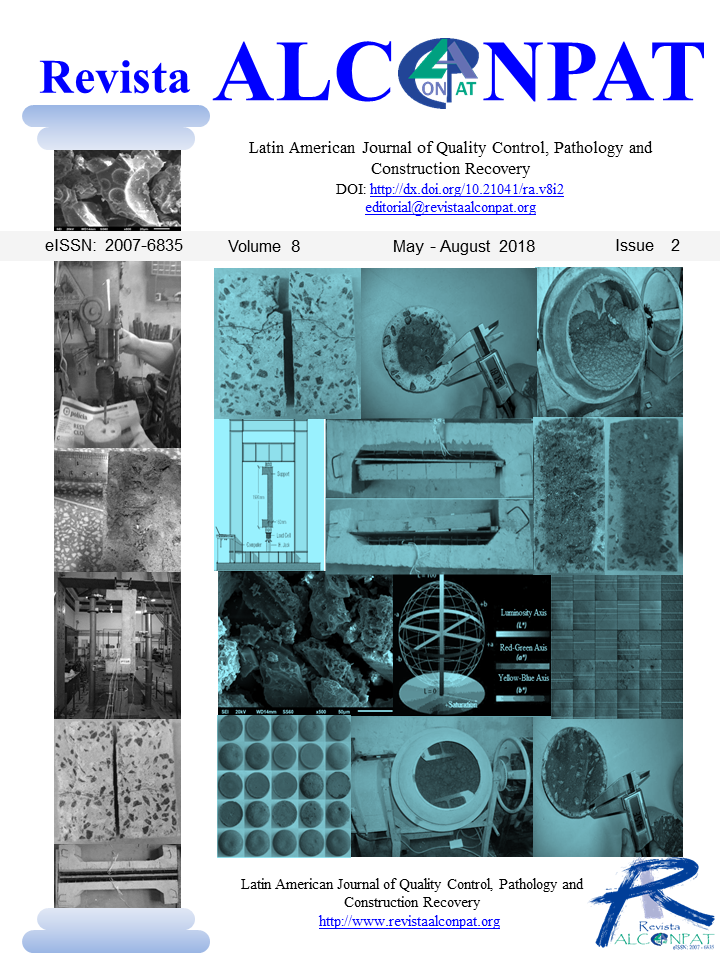