Journal of the Latin-American Association of Quality Control, Pathology and Recovery of Construction.

With great satisfaction, we present the first number of the seventh year of the ALCONPAT journal.

This edition presents our fifth Special Issue, this time dedicated to smart applications for smart sustainability on maintenance and recovery of constructions for celebrating the extense academic trajectory of Dr. Nemkumar Banthia and Dr. Muhammed Basheer that were honored during the 2nd R N Raikar Memorial International Conference, held at Mumbai, India.

The V7 N1 issue begins with a research from India, in which S. Bansal et al evaluated a two iconic bridges project over River Yamuna at Delhi. Both of them are being constructed and were reviewed from a sustainability point of view by using the Fuzzy-Vikor technique. In general, sustainable features are providing a balance between the natural environment and economy. During the study, it was realized that social, economic and environmental are the established parameters of sustainability for developed countries only whereas other issues like Governance, Technical parameters and Inner Engineering also play a key role for developing economies like India.

In the third paper from India, A. Narayanan and K. V. L. Subramaniam discuss how piezoelectric based PZT (Lead Zirconate Titanate) smart sensors offer significant potential for continuously monitoring the development and progression of internal damage in concrete structures. Changes in the resonant behavior in the measured electrical conductance obtained from electro-mechanical (EM) response of a PZT bonded to a concrete substrate was investigated for increasing levels of damage. Changes in the conductance resonant signature from EM conductance measurements were detected before visible signs of cracking. The root mean square deviation of the conductance signature at resonant peaks was shown to accurately reflect the level of damage in the substrate. The findings presented by the authors provide a basis for developing a sensing methodology using PZT patches for continuous monitoring of concrete structures.

The fourth paper, by A. Tena et al from México, presents a proposal to update the masonry index compressive strength design value f*m for solid concrete units for the masonry guidelines of Mexico´s Federal District Code. Solid units were made taking into account the characteristics of the most commonly used raw materials available in the Valley of Mexico. Different tests were conducted for both, raw materials and the obtained concrete units. Based upon test results, it is illustrated why it is much better to design masonry structures based upon the experimental data of the units to be used at the construction site rather than using index values proposed in building codes.

Another paper from K. van Breugel and T. A. van Beek from the Netherlands, deals with ageing as an inherent feature of concrete nature. Yet it seems to be a rather new topic in both science and engineering. The main reason for increasing attention for ageing as a topic is the growing awareness that, particularly in industrialized countries, ageing of our assets is a financial burden for the society and affects the overall sustainability of our planet. In this contribution, the authors address the urgency and challenges that represent ageing of concrete structures. The complexity of ageing problems was illustrated by watching in detail the evolution of concrete mix design and the consequences thereof for the long-term performance of concrete structures.

In the seventh paper from México, L. M. Reynosa Morales et al present a study about emergy analysis where an environmental valuation method was applied to concrete mixing with the purpose of evaluating its dependence on non-renewable natural resources. The quantity of environmental resources used in production was measured in terms of equivalent solar energy. The resulting transformities were compared to show that emergy analysis is sensible to the local context and the limits of the reference system. The results obtained show that concrete mixing is highly dependent on external resources. Semi-industrialized concrete was found to be the most sustainable.

The last but not least paper from Nepal was authored by B. L. Nyachhyon. This is a documentary research to pay attention of local and international community including the government and donors to gear up for policy reform and create an environment for investing in proactive earthquake safety initiatives before the next earthquake strikes. The paper focuses on the outcome of the author’s continuous interaction with local community since 1985 on the need for extended earthquake safety initiatives through stakeholders’ easy access to technical assistance and financial resources. The most neglected aspect in the earthquake initiatives of Nepal was the lack of state ownership and dedicated responsible institutions. The opportunity created by the April 2015 earthquake is now a chance to apply those initiatives

It is noteworthy that the commitment and efforts from authors, reviewers, and editorial board during these past six years, have positioned the Alconpat journal within the Indexes of Conacyt (National Council of Science and Technology of Mexico), Latindex and Scielo.

On behalf of he Editorial Board

Commentary for the Special Issue

Concrete is currently the most popular construction material in the world. This has been achieved through progress in research and developmental activities over many decades by numerous researchers and practioners. With the intention of sharing the latest developments in areas of innovation, research and practical application of cement and concrete in the construction industry, particularly to bring researchers, practitioners, specifiers, material developers and end users in one platform, the India Chapter of the American Concrete Institute started the R. N. Raikar International Memorial Conference series in 2012. The organizers also decided to felicitate an internationally leading researcher in any of the above fields. In 2012, the honoree was Prof Surendra Shah from North-western University, USA. We both were chosen to be the honorees during the second conference in December 2015 which was held at Mumbai. Therefore, it is our honor and pleasure to write this commentary on the R. N. Raikar International Memorial Conference.

Both of us have been participants of many international conferences globally and whilst comparing with them we are pleased to confirm that the organizers convened a truly international event as part of the second R. N. Raikar International Memorial Conference. We were extremely impressed with the quality of the papers, presentations and the arrangements. The conference provided an opportunity to discuss some of the recent developments in materials technology, performance of concrete in structures, investigation techniques and service life prediction. It was particularly pleasing to see papers on the practical application of recent developments in some global projects. Keynote lectures were given by eminent international researchers.

As the technical committee was very pleased with the quality of the papers, they have decided to publish a selection in international journals. This is to help achieve wider publicity of the recent developments reported at the conference. We believe readers will find these papers useful for their research or practical application of research, as the case maybe.  We would like to thank all authors for their contributions to this special issue of Revista ALCONPAT. Further, we wish to express our gratitude to the organizing committee for felicitating us at the event. 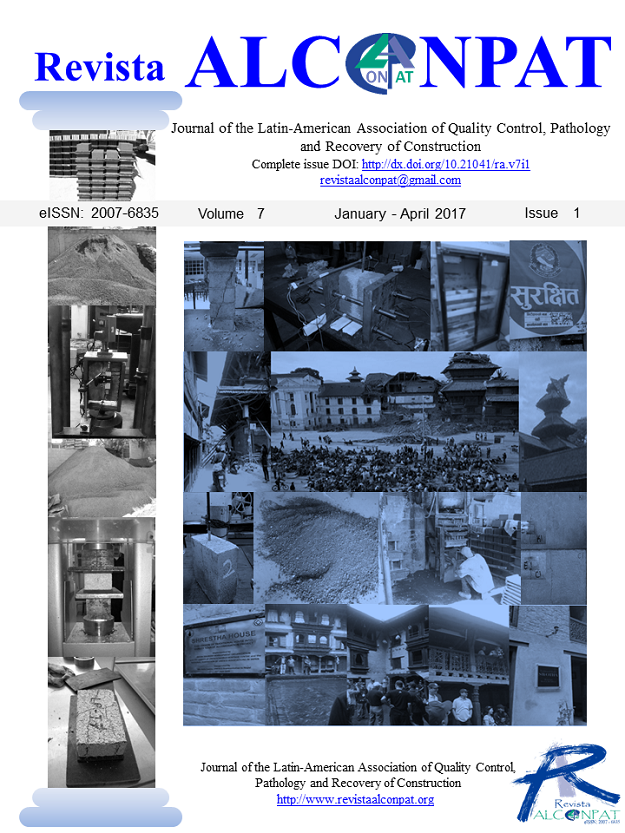