Latin American Journal on Quality Control, Pathology, and the Recuperation of Construction

It is gratifying for the team of the ALCONPAT Journal to see the second issue of our sixth year published.

The purpose of the ALCONPAT (RA) Journal is to publish case studies related to the topics of our association, such as quality control, pathology, and the recuperation of constructions, all the while motivating the presentation of basic or applied researches, revisions, or documental researches.

This edition V6N2 begins with a work from Brazil, in which C. G.N. Marcondes and M. H. F. Medeiros demonstrate that hierarchical analysis is an efficient tool in investigating the dispersion efficiency of carbon nanotubes in a water in concrete mixture. Twelve types of dispersions were studied for multi-walled carbon nanotubes both in dust form and already dispersed in water in an aqueous medium with various chemical products.

The second work, from Mexico, by L. Y. Gómez-Zamorano and C. E. Castillo-Linton, deals with the evaluation of the effect of adding silica nanoparticles (SN) to two cementing matrices, ordinary Portland cement based as well as sulphoalumineous cement based, with the purpose of establishing its influence on the mechanical properties and the chemical resistance of said materials. To this end, the SN were added in dosages of 0.30% to 5.0% in weight. The results indicated that both the resistance to compression and to a chemical attack by sulfates were improved due to the addition of SN.

In the third article, from Brazil, P. Valentini and C. S. Kazmierczak analyze the pathological manifestations that can occur in ceramic tiles, such as the loss of adherence, which is considered the most serious due to the risk of accidents by falling and the elevated repair costs. This work had the objective of evaluating the influence of the properties of different ceramic slabs, applied with two types of mortar and subject to three different curing conditions (established by standard ABNT 14.081-4:2012), on the adherence resistance of the coating system. It was observed that the type of curing is the variable that shows the most significant influence on the adherence resistance, followed by the type of mortar used.

The fourth article is from Argentina, by Néstor F. Ortega et al., and deals with the results obtained from exposing reinforced concrete beams subject to flexural stress to a process of accelerated corrosion, thus generating tensile stress on the corroded reinforcement. The results evidenced the influence of the reinforcement coating thickness on the corrosion process and its external manifestation (cracking of the coating), considering the same mechanical needs.

The fifth work in this issue is from Brazil, by Wellingthon Mazer et al., and evaluates the incidence of the pathological manifestations in the facades of buildings correlated with the geographical direction. It was found that the pathological manifestations in the facades appear in different amounts and directions, having identified a relation with the temperature variation and the direction of the wind in function of the geographical orientation.

The sixth article is from Portugal, in which Tiago Morgado et al. present a study on the fire resistance of beams manufactured with profiles of glass fiber reinforced polymer (GFRP). With the results obtained, it was possible to develop a numeric model in the ANSYS FLUENT software to simulate the evolution of the temperature ranges in the cross-section, as well as an analytical model to determine the evolution of the deformation of the beams.

The seventh work is by Arnulfo Luévanos Rojas, from Mexico, in which a model is presented for the design of rectangular combined boundary footings with two restricted opposite sides, considering the real pressure of the ground on the contact surface of the footing. The mathematical focus suggested in this work produces results that have a tangible precision to find the most economical solution.

The closing article is by Caroline C. Deghenhard et al., from Brazil, who present a work on external structural reinforcement through steel sheets adhered with epoxy adhesive as an option to increase the load capacity of reinforced concrete elements. As a result, they present a relative comparison on the performance of the beams.

In this V6 N2, RA is pleased to increase its publication rate from 6 to 8 articles per issue, thanks to the enthusiastic participation of its authors and readers. It should be noted that RA now has DOI numbers to facilitate the indexation and localization of the works. Likewise, RA launched an OJS portal and a more user-friendly address for our readers (www.revistaalconpat.org). We thank the authors participating in this issue for their willingness and effort in presenting quality articles and for their compliance regarding the established deadlines.

By the Editorial Board 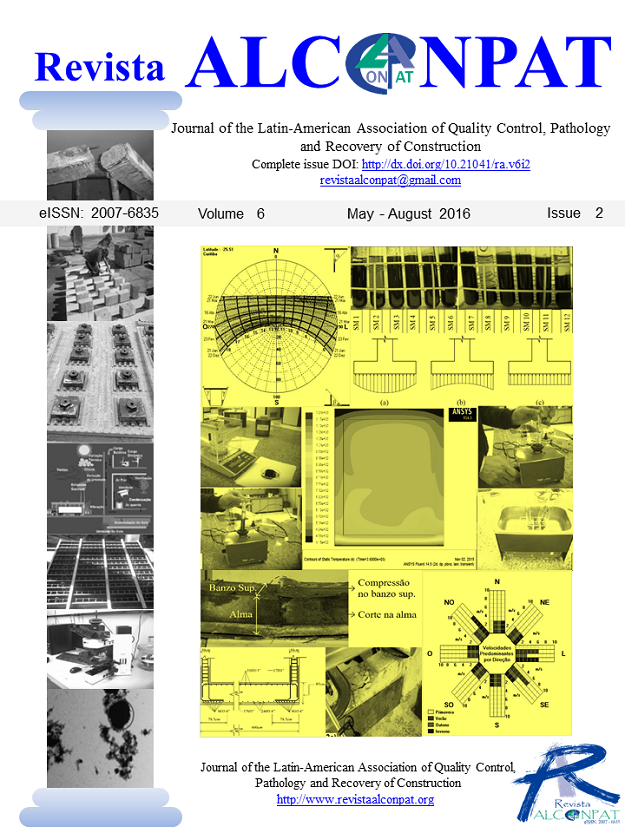